Compared to the 3-speed D6T, which it replaces, the D6 XE, first unveiled at the Trimble Dimensions show, offers up to 35 percent better fuel efficiency and increased agility, says Sam Meeker, product application specialist. With no gears to shift, the machine’s constant power to the ground, continuous push and greater maneuverability means faster cycle times.

“This is truly a 30-year redesign. Everything is either new, updated or beefed up on this machine,” Meeker says of both the D6 XE and the all-new D6.

How an Electric Drive Works

Here’s how Cat explains it:

The electric drive system starts with a Cat C9.3B engine. But instead of powering a torque converter, the engine drives a generator which turns the mechanical engine power into electricity.

And instead of a transmission, an electric motor powers the final drives. A power inverter is connected to both the generator and the motor by heavy-duty power cables and connectors, and this inverter controls the flow of electricity between the two components. 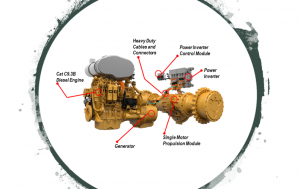 The electric motor can operate at all ground speeds, ensuring the dozer is always operating at the most efficient point possible.

The electric drive components are fully sealed against the environment and liquid cooled, so the whole system performs efficiently and reliably in the most demanding dozer applications. Like a traditional powershift transmission in a high drive dozer, the D6 XE Electric Drive power train is completely modular, so internal components can be accessed quickly and efficiently.

Max Torque at Any Speed

“Electric drive gives you maximum torque at any speed, so the tractor can quickly respond because it’s all electronic,” Meeker says. “Users can hit a pile and instead of lugging down, it can roll right through it.” Cat estimates that the XE version has an 8 to 10 percent productivity improvement over the new D6.

All of these factors have Cat claiming that customers “can expect to see payback of the added investment over a D6 in less than two years,” based on average cost per bank cubic meters (cubic yards) of material moved in typical construction applications with 1,500 hours/year. (Individual results may vary based on application, hour utilization, operator and other factors.)

Introduced alongside the D6 XE, the 4-speed power shift transmission D6 also has productivity bragging rights, offering up to 20 percent fuel efficiency versus its 3-speed predecessor, Cat says. Fully automatic, the D6 reduces momentary hesitations inherent in traditional machine shifts, and offers another gear between what would have been first and second on the D6T.

This article was originally written and published by Marcia Gruver Doyle at Equipment World.