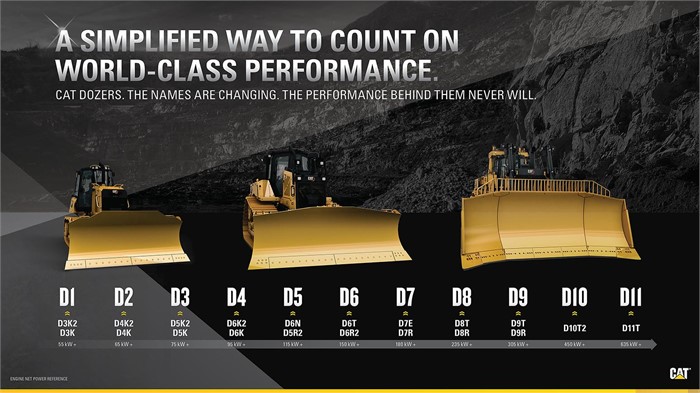 Caterpillar® is known for changing the game with their dozers – but now, these industry-leading machines are getting some upgraded names as well. The nomenclature change is being implemented in an effort to simplify the names of the machines. Now, the dozers have titles that drop the letter suffixes following the numbers. Additionally, the number within the machine title correlates to the horsepower of the machine.

Here is a breakdown of the dozer name changes from Caterpillar and the machines’ corresponding horsepower:

The Cat dozer name change is an effort to simplify the naming process — making the labels easy to identify and understand.

The company’s goal is to eventually simplify the nomenclature of all their equipment, with dozers being the latest type to change.

When Will the Dozer Names Officially Change?

The dozer names will change over a gradual rollout period. Once Caterpillar redesigns or upgrades each size class, every machine will get a new name.

A few suffixes will also remain with the new name changes. For example, the D7E and the D6 XE will retain their alphabetical suffixes because of their unique hybrid diesel-electric powertrains. The low ground pressure (LGP) tag will also remain on models with wider tracks. Eventually, you may also see the “GC” moniker on dozers to denote basic models with less technology and a lower price point.

Suffixes on Cat dozer names previously designated different feature sets. Now, you’ll need to know the serial number or year-model number to know which have been updated. Cat dozers are usually redesigned every two to five years. For more minor updates, a serial number break may occur. For major changes or new product introductions, there will be a full serial number prefix.

At Carolina Cat, our team has learned the ins and outs of these name changes so we can assist you in finding the perfect machines during the rollout. We have the knowledge and expertise to answer all your questions and guide you through the change.

Whether you need new, used or rental dozers, we have a large inventory of high-quality machines for you to choose from. Browse our selection of Cat dozers online or contact us for more information.